“You don’t know what death is!”

Death is the blackest eyes.

It’s one good scare, and we all deserve it.

In 1979, John Carpenter’s modestly – budgeted horror thriller HALLOWEEN undeniably changed both our favorite genre and our favorite holiday. There isn’t much I can say about the horror classic that hasn’t already been said. For me, it’s more than another horror movie. It’s as much a zeitgeist, a section of my life, as it is an isolated piece of escapism.

There was a book store in the mall where I attended church. After services, while Mom was getting her social on, I would hop down to the book store and have a gander.

I can’t remember the name of the place. It was one of only a handful of businesses that dared to open on the Lord’s Day in the near-hidden shopping center that to this day sits mostly empty. My guess is, the adjoining Office Depot is the only reason it hasn’t been dozed. It was during excursions to this purveyor of fine literature that I discovered Arnold Schwarzenegger via his biography Education of A Bodybuilder, which is a good read, BTW, whether you even lift or not. …Bro.

Fifty Worst Films Of All Time was there as well. Finding GODZILLA VERSUS THE SMOG MONSTER listed within sent me into a tailspin of indignant rage. It was one of my favorite movies. I bought the book of course, and wrote a three page rebuttal defending the kaiju classic. Don’t think I ever actually mailed it.

One fine September Sunday, I glanced at the paperback rack and beheld this:

That third option is gonna be a hard sell.

The official movie novelization, released in advance to generate interest.

The figure on the cover is not an accurate representation of Michael Myers by any means, but it damn sure conveyed the horrific threat of an escaped psychopath who could blend into throngs of Halloween celebrants. There was a section of pics inside that included a harried Loomis, a terrified Laurie — and The Shape, as Mister Myers was then called, emerging from shadow. 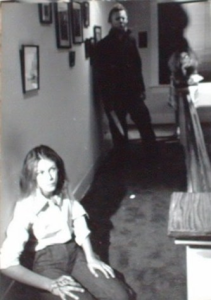 Gee, something sure smells stabby.

I read a passage and returned the evil little tome to its display. Not for me, this level of mind-scarring scaritude. Not yet.

Cut to: two years Iater. I was in that confusing, exhilarating part of my teens that can make or break one’s entire adolescence experience. Either somebody told me or I saw it in the TV Guide (which seems like such a quaint and redundant publication now) that the most talked-about horror film since THE EXORCIST was coming to network television.

NBC scheduled their version of HALLOWEEN to coincide with, and promote, the release of the sequel, which was one of the first, I believe to forego the use of RETURN, REVENGE or SON OF to indicate continuation. Ironically, the first two would grace later sequels, while the third — well, read on.

I understand some additional scenes were filmed for the TV version of HALLOWEEN to make up running time for heavy cuts, but I couldn’t tell you which were which. (More info on that can be found on a special edition DVD somewhere, or just read here: http://www.angelfire.com/film/jc-halloween/halloweenontv.html)

I’d heard the legends. Kids used to talk about movies like they were real events, you see, before video blog set diaries and behind – the – scenes documentaries came along and ruined everything. The Shape, it was whispered, absolutely can not be stopped by any force — not even The Almighty Gun.

By the time of this historic television event, I’d experienced a growth spurt, a healthy interest in the opposite sex, and a growing interest in more mature horror. Suffering from often-crippling introversion and social awkwardness, I reasoned that watching harder horror films would somehow make me braver.

It’s hard to articulate this well, but I remember a need also to “be there” for the beautiful and vulnerable girl I’d seen cowering in that paperback; to protect Jamie Lee/Laurie/The Final Girl with what I was sure was my Shaw Brothers-movie-level of kung fu prowess. 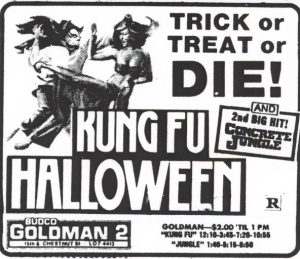 Like a big boy, I watched it alone with the lights off. Much as I had heard about it, I was not prepared for the abrupt nut-punch that was the final shot; a feeling of incompleteness that also ironically felt final.

Fortunately, that much-needed closure, the “rest” of the story, was as close as my local cinema.

I was too young to drive; a mere freshman in high school. I asked my mom to drop me off at the theater, and amazingly, she did. It was the Plaza in downtown Asheville, which at that time was considered “rough.” I’d already been dropped off on my own or with my little brother Egan at least a handful of times to see the kinds of kung fu and low budget action flicks that people refer to as “grindhouse” these days, and come away unscathed. No way my old man, and certainly not my mom, would sit through that crap if they didn’t have to. So I suppose it seemed reasonable that I could survive a late showing of R rated horror. Maybe my folks were more progressive than I give them credit for. Maybe they secretly hated me. Whichever the case, I caught a break that a lot of kids my age did not, and I wasn’t going to waste it.

Better still, as I sat off to myself awaiting commencement of the darkening and the flickering and the killing, I was surprised to hear familiar voices. I turned to see two junior girls I knew from my school bus, chattering excitedly. I gave a wave and next thing I knew, the ladies were seated on either side of me, squeezing themselves against me for protection against the unfolding atrocities, and sending my young heart into a tailspin of weirdly pleasant associations. I guess my lifelong horror fixation was a sealed deal at that point.

All too soon, the melodious strains of The Chordettes singing “Mister Sandman” swelled, as end credits rolled. At this point, some clever chap impressed his date by calling out “What’s next? Son of Halloween?” It’s weird the things that stick with you. I like to think that couple is still together, that they watch H2 every year, and he cracks that same joke afterward.

The next year, Halloween got another TV showing, and I had acquired a “girlfriend.” You see, I place “girlfriend” in quotations, because the night I went to her house to watch it with her and her folks, she spent the entire time on the phone talking to her “boyfriend.”

So I sat there with her parents, in what was surely an uncomfortable silence for them, and watched my new perennial classic. And you know what? I did not miss ol’ whatsername in the least.

Since that time, I’ve revisited HALLOWEEN maybe five times, which is paltry for someone who considers themselves such a fanboy for it. That’s really the case with most films for me. I believe that, given time between viewings, a movie can continue to surprise you throughout the years, while eliciting memories along the way.

Autumn and Halloween times seem powerfully provocative in producing this effect. The movie HALLOWEEN, just as much. Who knows when I’ll watch it again?

This year, in a sense, I feel I’ll have the opportunity to re-visit that wistful and wonderful time in my life, via David Gordon Green’s updated HALLOWEEN. Like The Shape himself, the film series refuses to die. But now we’ve come full circle, with John Carpenter back to produce, bringing along Jamie Lee Curtis and even the actor who first portrayed Myers, Nick Castle; both reprising their roles.

Advance word is strong, and the release date of October 19 seems just about right (some previous series entries have dropped in August! Sacrilege!)

I will be there.

Portal to the Madness